Gem Of The Week - Aquamarine

We thought it was about time we talked about Aquamarine, the delicate soft pale blue stone which is extremely popular as a cut gemstone and less so as semi-precious beads, but we love it all the same!  It’s steeped in myth and legend, is the birthstone for March, the official gemstone for a 19th wedding anniversary and gives birth to the colour of the same name. I doubt there are many people who have never heard of Aquamarine!

The name ‘Aquamarine’ comes from the Latin ‘aqua’ for ‘water’ and ‘marina’ for ‘of the sea’, giving rise to various monikers such as “gem of the sea” or “sailor’s stone”. It belongs to the Beryl family which also includes Morganite, Goshenite, Yellow Beryl and Emerald. Aquamarine is the name used for any blue variety of Beryl within a colour range of greenish blue to blue and can range from a very light, almost imperceptible colour to a rich vibrant colour. Stones with a rich blue colour are the most popular. They are also the rarest and most valuable.

For over 100 years now, the largest source of Aquamarine has been in the state of Minas Gerais in south-east Brazil, although recently Africa has become a strong rival with mining activities in countries such as Kenya, Madagascar, Malawi, Mozambique, Nigeria, Tanzania, and Zambia. It is also found as pegmatite deposits in Afghanistan, Pakistan, and Russia with India and Sri Lanka having long histories of production from alluvial deposits. Pieces from Russian sources are highly sought after not only for their colour but also because their mines are now depleted.

Aquamarine has always been associated with the sea with jewellery-making dating back as far as 500 BC. Our friend ‘Pliny the Elder’ wrote "The lovely Aquamarine, which seems to have come from some mermaid's treasure house, in the depths of the summer sea, has charms not to be denied". Legend has it that the Romans and Greeks believed Aquamarine grew stronger when submerged in water, and sailors would cast it overboard in rough seas to appease the gods.

In Brazil in 1910, the largest ever Aquamarine was found and weighed in at a staggering 110kg. It was faceted into smaller stones for use in jewellery, and they collectively weighed over 100,000 carats! The world's current largest Aquamarine is known as the 'Dom Pedro', which is shaped like an obelisk, weighs in at 10,363 carats and can be viewed at the Smithsonian in Washington DC.

Aquamarine is best known as a highly transparent blue stone that is faceted and then set into jewellery pieces such as rings and pendants. Unlike Emerald, high-clarity, fracture-free Aquamarine is abundant and much more affordable!

Translucent Aquamarine is also desirable and often cut into beads and cabochons. Necklaces strung with beads of pastel blue Aquamarine and pastel pink Morganite (both from the Beryl family) make a beautiful and classic combination.

Most Aquamarine is greenish blue when mined and is often heat treated to remove the green hue. This converts the Ferric Iron (which gives the green hue) to Ferrous Iron (which gives the blue hue). Since it does not take a high temperature to purify the colour of Aquamarine, it is practically undetectable in nearly all laboratory tests. It is always safe to assume that any Aquamarine you purchase has been heat treated. Aquamarine has a hardness of 7.5 to 8 on the MOHs scale, making it one of the harder gemstones.

Associated with the Throat chakra, Aquamarine is said to help one overcome the fear of speaking and is considered an excellent stone for teachers and presenters alike. It is believed to help one relax to a stage of consciousness in which one is fully aware of one’s own truth, wisdom, and feelings. It is regarded as a stone of natural justice that encourages oneself with compromise and negotiation.

Here are some of our amazing Aquamarine products. 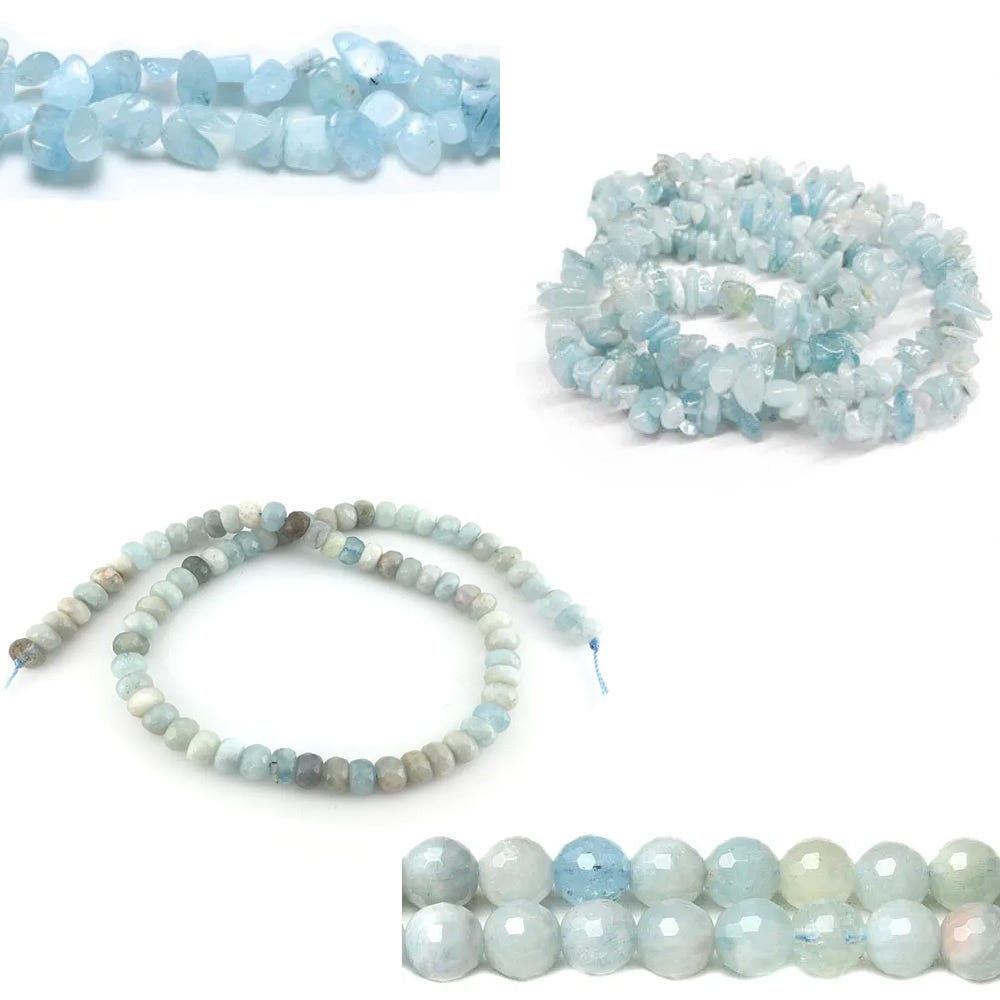