Gem Of The Week - Hematite

Potato, Potahto, Tomato, Tomahto, Haematite,  Hematite, let’s call the whole thing off!  Yes, this week we look at one of the best-known gemstones which pretty much has a 50/50 split between how people spell It (and therefore pronounce it). Being a Yorkshireman, in true tradition I prefer words with fewer letters, so Hematite it is! And that’s just for starters – how about magnetic and non-magnetic?  Which of those is natural?  Read on and find out …

Hematite is a metallic steel-grey stone that when polished up makes for a lovely bead to use in all aspects of jewellery-making.  It is super abundant, super cheap and is easy to electroplate so can come in a range of beautiful colours.  Did you know that you can also find natural rusty-red Hematite?  This colour gave birth to its name, from the Greek word “haemo” meaning blood.

Hematite is found in iron-mining regions around the world. The largest hematite deposits are found in Quebec, Canada, near Lake Superior. Other notable places include Brazil, England, Germany, Hungary, Elba (Italy). Poland, Spain, Switzerland, the United States, and Venezuela.

Another interesting place where Hematite is abundant is the planet Mars. Discovered in 2001 by an infrared spectrometer on the NASA Mars Global Surveyor in orbit around Mars, Hematite was seen in abundance at Terra Meridiani near the Martian equator and the Aram Chaos site near the Valles Marineris.

The red chalk writing from powdered Hematite is one of the earliest in human history. It was first used 164,000 years ago by the Pinnacle-Point man, probably for social purposes – an early version of Facebook maybe!? ????

Red ochre clay contains elements of Hematite and people have used this powdery chalk since the Stone Age for decoration and writing. More recently, rouge, a polishing compound widely used on silver and gold, is also a powdered form of Hematite. It has been mined as a source of iron through the ages too.

Gem cutters often make cameos, intaglios, carvings, beads, and cabochons from Hematite. This leads to it being a popular gemstone amongst jewellery-makes and is often combined with other gemstones in alternating patterns.

Hematite is a kind of iron ore that is made up of iron oxide crystals. Although reasonably tough (harder than Iron!) with a hardness of 6.5 on the MOHs scales, Hematite is also quite brittle.

And now for the question around Hematite and magnetism…natural Hematite is NOT magnetic. You may encounter a magnetic material sold as “Magnetic Hematite” but despite its name, that material contains no Hematite at all. Although these pieces simulate Hematite and can even have red streaks, their magnetism exposes them as fake! Despite that, we have to put “Non-Magnetic” on all of our Hematite products such is the general belief that there is a magnetic Hematite.

It is said that Hematite helps to dissolve one’s negativity and keeps one from absorbing other people's negativity. It is believed to be a powerful stone that may help one with shyness, self-esteem, and survival, as well as increasing one’s willpower and dependability and instilling confidence in oneself. It is thought to aid in the treatment of overeating, smoking, and other kinds of overindulgence, as well as compulsions and addictions.

Here are some of our incredible 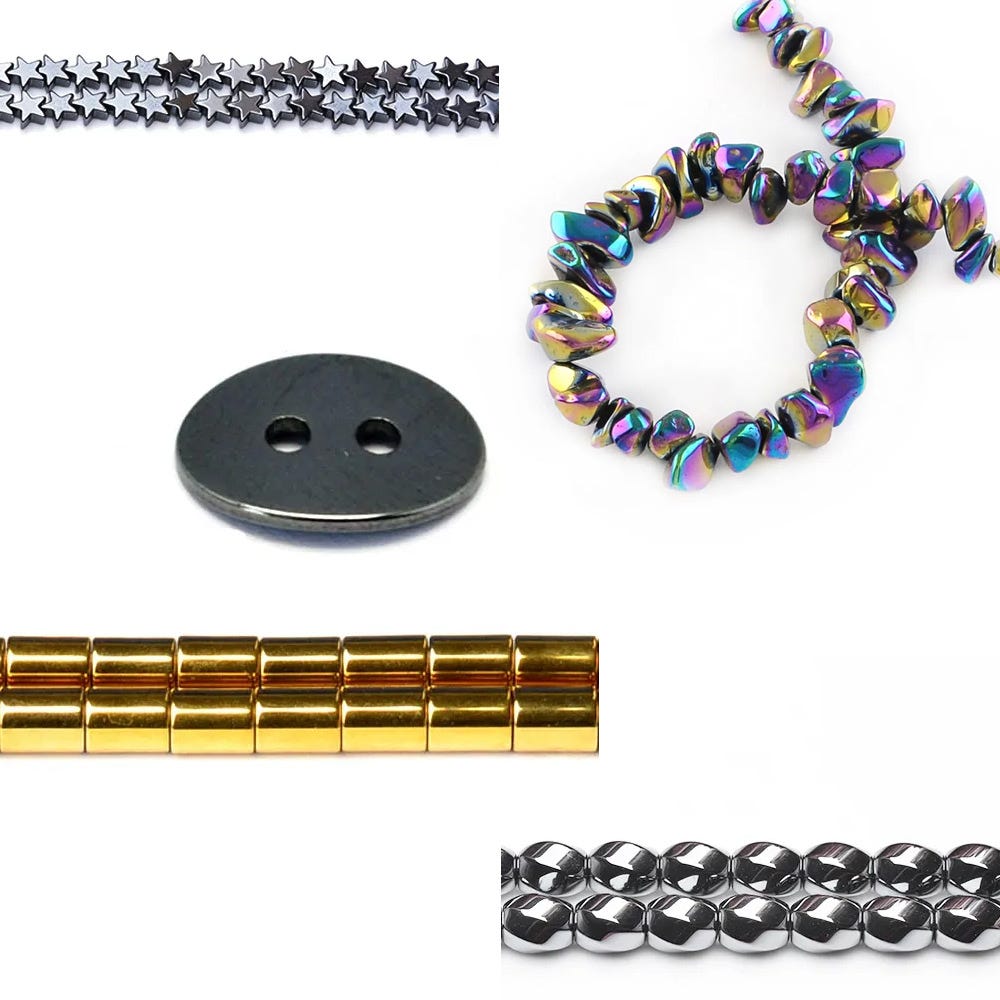