Gem Of The Week - Lapis Lazuli

When Vincent Van Gough started out creating his Starry Night masterpiece, perhaps he had been inspired by one of our favourite gemstones here at Charming Beads, the delightfully luscious Lapis Lazuli. With its intense deep blue background and twinkles of gold Pyrite flecks, this ancient gemstone has been prized by many civilizations over thousands of years and is still hugely popular today.

Lapis Lazuli is actually a combination of three major minerals, namely Lazurite, Calcite, and Pyrite. The gemstone can also contain lesser amounts of Diopside, Feldspar, or Mica. Lazurite is the mineral responsible for producing the gem’s most prized deep blue colour. Lapis frequently contains varying amounts of a whitish Calcite matrix, the host rock that surrounds the Lazurite rock, interspersed with flecks of glinting gold Pyrite. The modern market demands less of the white Calcite (which is sometimes sold a Denim Lapis) but rather it wants the deep blue uninterrupted Lapis with plenty of gold Pyrite flecks.  For this reason, most Lapis in the jewellery-making trade today is enhanced with a blue pigment to mask the white Calcite.  This makes it much more affordable for everyday jewellery-making.

Worldwide, Lapis Lazuli is mined in several areas. The traditional source of the finest Lapis is the same today as it was thousands of years ago—the mountains of Afghanistan. Other major sources include Chile and Lake Baikal in Siberia. Some smaller sources are found in Angola, Canada, Pakistan, and the US.

Historians believe that humans have been using Lapis Lazuli for almost 10,000 years! The gem was treasured by the ancient civilizations of China, Greece, Mesopotamia, Rome and most famously of all, Egypt. They all valued it for its vivid, deep blue colour, and cherished it as much as other blue gems like the Sapphire.

Lapis Lazuli artifacts, dated to 7570 BC, have been found at Bhirrana, which is the oldest site of Indus Valley civilisation. Lapis beads have been found at Neolithic burials in Mehrgarh, the Caucasus, and as far away as Mauritania.

Pharaohs and judges in ancient Egypt wore emblems of Maat (the goddess of truth) made from Lapis Lazuli. They believed the stone bore religious significance and displayed the high status of their leaders.  The death mask of Tutankhamun was made out of high-carat gold with inlays of Lapis Lazuli which was used to create the eye surrounds, eyebrows, and details on the beard!

One famous legend stated that King Solomon was given a ring made of Lapis Lazuli by an angel. The ring gave him the power to control a group of demons to build his temple.

For millennia, Lapis Lazuli has been made into various forms in order to show off its enticing deep blue colour. Typically, Lapis is used in jewellery-making and cut into cabochons, beads, and pendants. Its use however has never been limited to jewellery alone since it is also a popular carving material. Throughout its history, Lapis has been fashioned into practical objects such as bowls, dagger handles, gaming boards, bowls, amulets and even hair combs!

Lapis is semi-translucent to opaque, with a waxy to vitreous lustre. It has a fair toughness, with its hardness ranging from 5 to 6 on the MOHs scale, depending on the mix of Lazulite, Calcite and Pyrite.

Lapis Lazuli is said to be a stone of wisdom, intuition, and truth. Its properties are thought to open the third eye chakra, the centre of intuition and inner wisdom. By enhancing one’s ability to turn inward and uncover one’s own truth, the energy of the Lapis Lazuli is believed to support oneself when readying to step into one’s power and authentic self.

Here are some of our amazing Lapis Lazuli products. 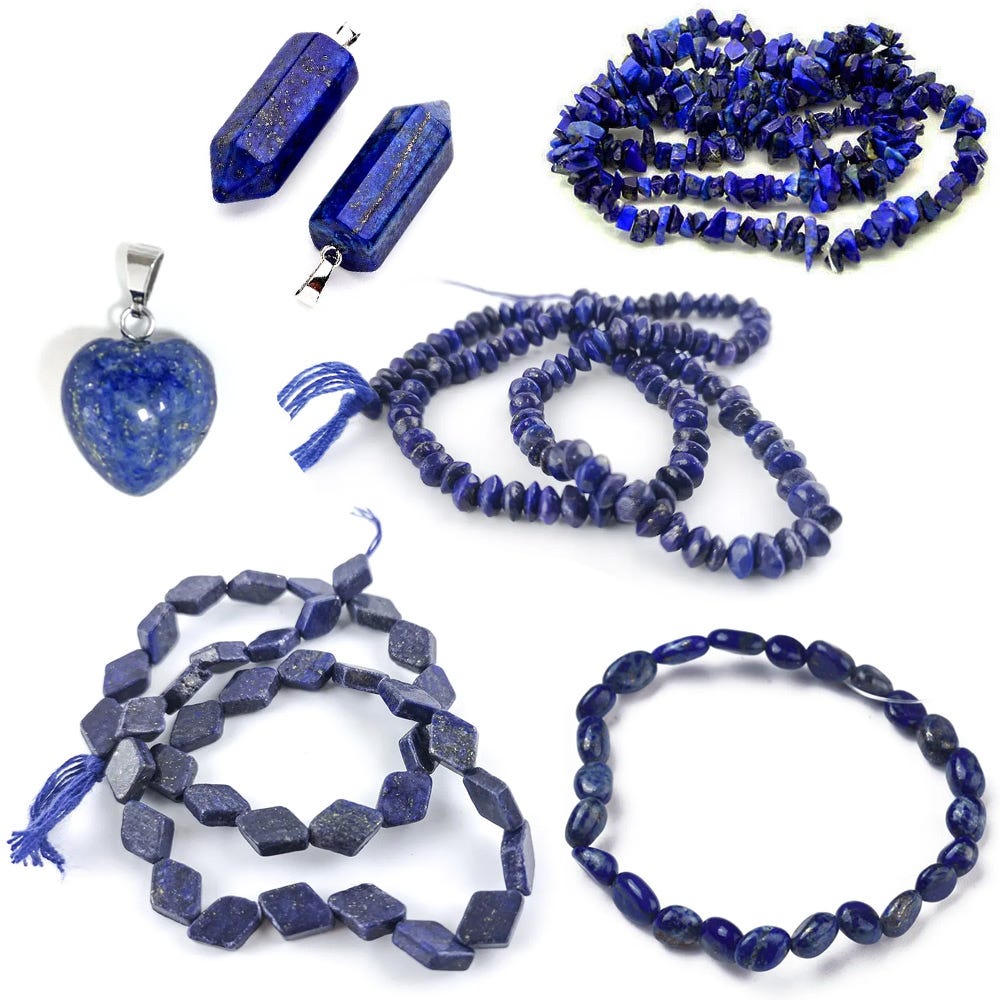