Gem Of The Week - Rose Quartz

This week we are featuring undoubtably our best-selling gemstone Rose Quartz. This beautiful stone with its baby pink colour is loved throughout the world for its delicate touch and its symbol of love, peace, and friendship. It is abundant, affordable, and available in just about every type of bead you can think of!

Rose Quartz forms in the core of granite and has a translucent to hazy appearance. Its colour can range from a very light, almost imperceptible pink to a rich translucent pink, depending on the trace amounts of titanium, iron, and manganese that are present. Although the most sought-after colour is baby pink, regardless the shade will always be very stable, and the colour will not fade with heat or direct sunlight.

Rose Quartz is abundantly found all over the world. Alto da Pitorra in Minas Gerais, Brazil, Albany Rose Quarry in Maine, USA, and Pegmatite 24 in Maine, USA, are notable gem locations. Large specimens of Rose Quartz can also be found in Madagascar, India, Germany, South Africa, and other places in the United States and Canada.

Rose Quartz beads have been discovered in Iraq (previously Mesopotamia) dating back to 7,000 BC! The Assyrians are thought to have created Rose Quartz jewellery approximately 800-600 BC and Rose Quartz was used as a seal by the Romans to indicate possession. Egyptians believed the stone could prevent ageing elsewhere in antiquity and made facial masks from it and placed it on tombs.

On June 2, 2013, In Brazil, a Rose Quartz inclusion specimen known as La Madona Rosa (the Pink Madonna) sold for $662,500, a new world record for mineral sales. The specimen is 15 x 8 inches and has a Smokey Quartz core surrounded by a gleaming halo of Rose Quartz crystals. It was discovered in the Sapucaia mine in Brazil in the late 1950s.

There are many legends about Rose Quartz crystal and how it came into existence. According to one, Cupid, the Roman god of desire and affection, was said to have bestowed Rose Quartz stone upon the Earth as a gift of love, passion, and happiness for all.

Rose Quartz is one of the most encountered lapidary materials. It is abundant, usually inexpensive, and popular as tumbled stones, beads, and cabochons. These have the richest colour when pieces are at least a centimetre in thickness because of the material’s weak colour. It is quite a tough stone with a lack of cleavage and is therefore very durable for use in any type of jewellery.  Rose Quartz is also widely available in decorative pieces and carvings, spheres, prisms etc. It is sometimes used to make opulent furniture such as sinks, baths, and kitchen worktops.

Rose Quartz usually occurs as massive, anhedral occurrences in hydrothermal veins and pegmatites of Granite. Some specimens of Rose Quartz contain a dense network of fine inclusions that align with the gem’s crystal structure. If a cabochon is cut so that its base is perpendicular to the c-axis, the cabochon might display asterism in the form of a six-ray star! Rose Quartz measures 7 on the MOHs scale.

The heart chakra is said to be related to Rose Quartz.  It is considered to be a famous stone for emotional healing and development. Wearing it, meditating with it, and keeping it close is thought to open one’s heart to all forms of love, including romantic love, familial love, friendship love, and self-love. It is also believed that Rose Quartz's helps to restore one’s confidence and aid one to move forward from hurt to renewed trust until prior situations are understood and accepted.

Here are some of our amazing Rose Quartz products. 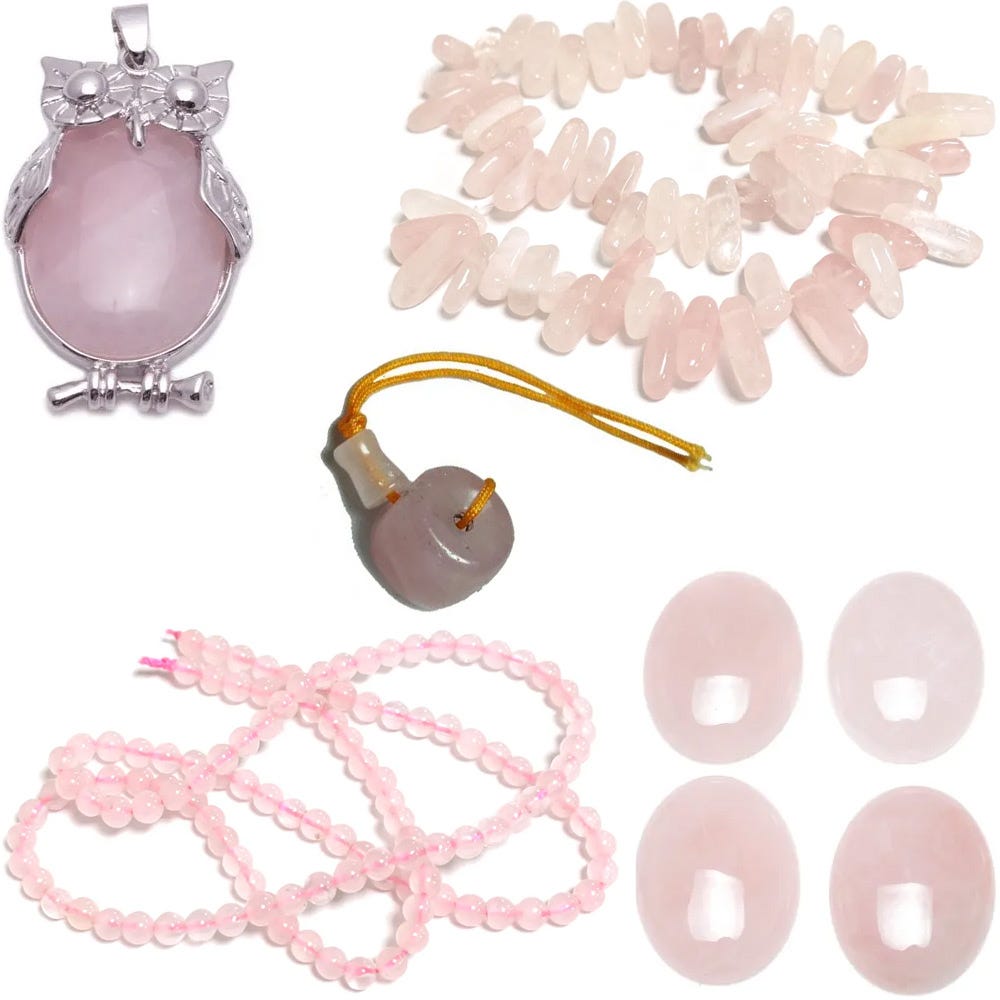