Gem Of The Week - Rutilated Quartz

Many gemstones in nature consist of a base rock with inclusions of varying minerals that can determine things like colour, opacity, and effects (such as asterism, schiller etc). One of the starkest examples of this (and from feedback, you’re going to love it or hate it) is Rutilated Quartz. Here, we have a Quartz that contains visible needles (or rutiles) that give this gemstone a very unique look and feel.  Of course, as with all gemstones, we absolutely love it!

Clear Rutilated Quartz looks like a manmade attempt to set some random filings or shavings into a clear resin, or at least it does to us anyway!  However, these sharp rutile inclusions are 100% the work of Mother Earth. The rutiles can form in the shape of an open fan or radiating mass, known as an “acicular”, or they can look like individual floating pieces of hair frozen forever in space! There are lots of different colours available such as black, red, brown, yellow, golden, and green amongst others.  Regardless of colour, the rutiles are always made from Titanium Oxide which incidentally is used in paints to make it brilliant white.  It is tiny trace elements that actually define the colour spectrum of this wonderous gemstone.

The two key locations where Rutilated Quartz is found in abundance are Brazil and Madagascar. They are also found in Australia, Austria, Belgium, Cornwall (UK), France, Kazakhstan, Luxembourg, Mexico, Norway, Pakistan, Russia, Switzerland and many parts of the United States. However, Brazilian Rutilated Quartz is perhaps the most abundant and therefore the most popular type.

The name Quartz is said to have been derived from the ancient Greek word “krustallos”, meaning ice. This is because the Greeks, as well as the Romans, believed that the Quartz crystal was formed by the Gods and was actually thought of as ice that never melted. The word Rutilated simply refers to the rutiles included within this variety of Quartz.

Rutilated Quartz was first discovered in Brazil in the Serra da Mangabeira mountain range in the 1940s where miners were originally picking up pieces of clear Quartz for optical uses. It was discarded by the miners for not being of much value in optical applications, however it eventually made its way to Bahia, El Salvador where local gem dealers soon realised what a beautiful gemstone they had on their hands!

In some circles, Rutilated Quartz is known by some very flashy names such as “Angel Hair Stone”, ”Fleches D’Amour” and “Cupid’s Darts”.  Sometimes it is also incorrectly called “Tourmalated Quartz”, which in fact is a totally different type of Quartz with Tourmaline inclusions.  So, let’s just stick to calling it Rutilated Quartz and we can’t go wrong

Rutilated Quartz is not used outside of decorative art, ornaments, and jewellery-making.  It is extremely eye-catching so is a favourite amongst beaders and cabochon wire-wrappers. It is particularly effective when interspersed with clear Rock Crystal Quartz on beaded bracelets and necklaces.

Rutile is a simple mineral, TiO2, which is very close to Quartz, SiO2, so if there is Titanium and Silicon in the growing atmosphere, you have a strong chance of the formation of Rutilated Quartz! The rutiles inside can take on many colours and forms, from thin needles of black, green, and red to big blades of bright golden yellow, sometimes radiating in a star pattern from the centre of a metallic Hematite inclusion. The rutiles can appear randomly or in bundles, which can be either sparse or even dense enough to make the Quartz look almost opaque.

Rutilated Quartz is said to help to fill one with compassion and loving energies while enkindling passion in one’s inner self. Daubed a “master healer, this stone is considered to be powerful stone for physical healing of various ailments such as migraines, bronchitis, vertigo and lethargy.

Here are some of our terrific Rutilated Quartz products. 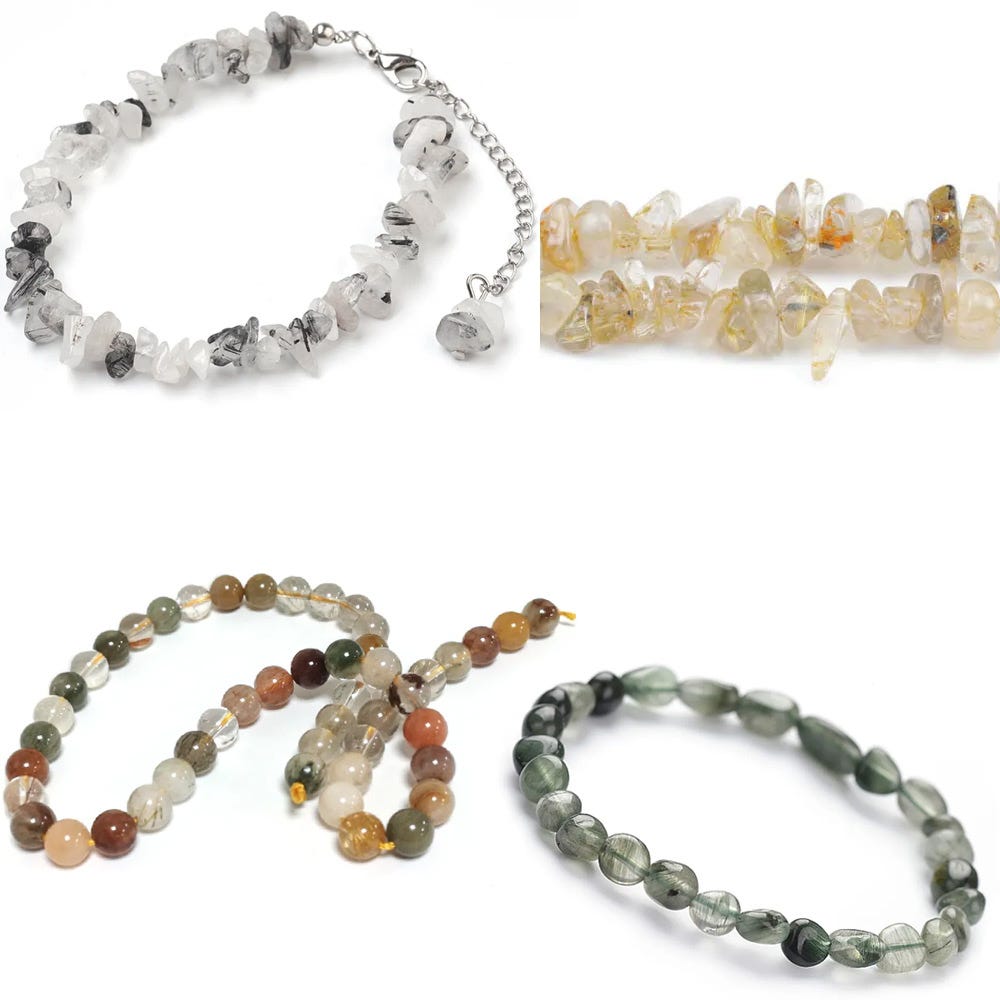