Earn 125 reward points with this purchase.

Add to Favourites
Add to Compare
Details
Description
A strand of 65+ beads. Made from Garnet and are green and brown in colour. These smooth plain round beads are machine cut. They are 5mm-6mm in size with a fully drilled 1mm hole across the middle. Actual product colour may vary dependant on screen capabilities & settings.Most often seen in red, Garnet is also available in many other colours including pink, green, orange, yellow, brown and black. It is found mainly in Ceylon, Australia, Madagascar, India and Brazil. A stone of commitment, red Garnet is said to represent love and control anger. Garnet has long been thought of as a travellers' stone. In traditional Hindu belief systems, Garnet is associated with the First Chakra, or the "Root Chakra", which is positioned at the base of the spine.
Customer Reviews
Write Your Own Review
Related Posts 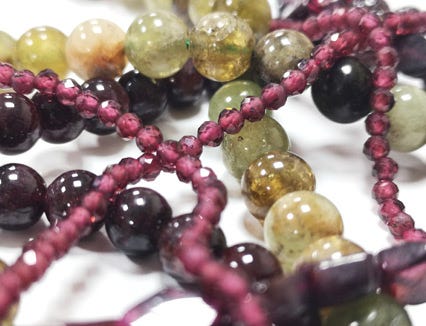